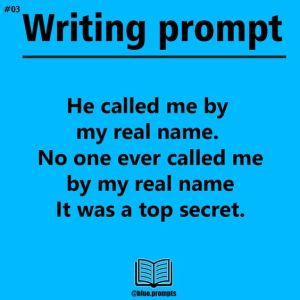 I stopped, knife floating above his neck. How did this man know my name? I died. I made a flash decision and stepped back from him, knife pointing at his heart.

“How do you know that name?” I asked, memories of my life 10 years ago starting to surface.

“I went to school with her,” he gulped, “She had your eyes.”

I froze. The name on my list was just S. Dexter and an address. That is all I have ever required. If I knew too much about my victims I couldn’t kill them, even after all these years. But now was a defining moment–I knew him. Samuel Dexter. Brown eyed shaggy black hair, gangly height Sammy Dexter. Why is he on this list? I never asked that question before, but something in me was asking now.

“What do you do?” I avoided the use of my real name.

He looked at me curiously, ” Nothing. I am just an assistant at a local business.”

I continued to stare at him because I could see the hidden answer behind his eyes. He caved.

“I also am involved in a local organization called Heart of Homes.”

Bingo. They are an organization that is working towards fixing up the slums instead of demolishing them and leaving people homeless. My employer is eager to shut them up.

At that moment something snapped in place–a memory. A memory of a brown-eyed, shaggy black haired, gangly boy helping me pick up my books a bunch of jocks decided I needed to drop. I remembered the smile. I remembered the kindness–something I hadn’t shown in 10 years.

I looked back at him, “Lisa’s dead. And if you are smart you will disappear as well.”

I turned away and headed toward the street. I couldn’t kill him. I knew him. And for the first time in 10 years, I found myself again. Things were about to change and I was ready to do whatever it took so another 23 yr old wouldn’t be brought into this life…

I am a daughter, a writer, and a reader. I am a Jesus Follower through and through. I am a photographer and a youth leader. Oh, and my favorite color is blue. View all posts by AshleyDannie

This site uses Akismet to reduce spam. Learn how your comment data is processed.

Fun Stuff for You

Other Ways to Interact with Me!